The State of Star Trek 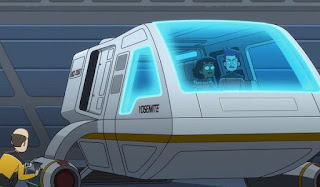 So... full disclosure, I love star trek more then life itself. I grew up with the TNG Technical Manual, countless little plastic starships. I even had a Ferengi action figure with a whip (Thanks Aunt Mary Ellen). I grew up watching TNG and Deep Space Nine. Through my later years I ended up watching voyager, and as a result ended up watching other science fiction (Babylon 5, Farscape, and more).

At this point, save the Original Series (Which I can't say I've seen all of) and the Animated Series (Which I have only seen reviews of), I have seen all of TNG, DS9, VOY, ENT, DIS, PIC, all the movies, and more then my fair share of the video games (including a bit of Star Trek Online). If i were to have one dream it would be to command a Starship and explore the vastness of space with a dedicated crew of scientist and more. Star Trek is the utopia which I strive for and a dream of the future I appreciate.
It is perhaps for that reason, as I watch trailers for The Lower Decks, hear more about Section 31, and generally become more acquainted with what will likely become known as Kurtzman era Star Trek that I grow... worried. 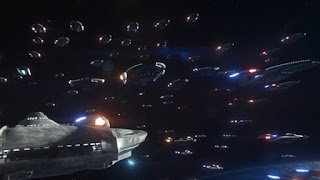 I don't want to sound like some kind of petulent child, it's been made clear from interviews that Kurtzman has a different sort of idea of where Star Trek is going. So where the Star Trek I grew up with had folks like Michael Okuda and John Eaves who spent more then a few hours coming up with new designs like the Enterprise E (Still one of my personal favorites). The new era of Star Trek is somewhat divorced from "Ship Porn".
Michael Chabon, one of the more recent executive producers I believe has actually spoken about the fact that he isn't really interested in that sort of thing, and I have to admit a tinge of sadness. I loved watching Deep Space 9 or Voyager and seeing the Akira, Saber, Prometheus, and even Dauntless. They were fun and interesting designs that filled the imagination. It was that incoherent technobabble which really drove me to love the series so much.
It's perhaps why in Picard's final scenes for season 1 when the federation fleet arrives all I could think was "That's horrible" because of the shear number of seemingly copy pasted models. Especially considering that the Federation Fleet Doctrine at least for the past 150 years in canon was to have a diversified fleet of ships each fulfilling their own roles in stark contrast to races like the Romulans.

Or perhaps it was the casual vulgarity tossed around by Admiral Clancy that caught me so very off guard. I don't wish to detract from it, in fact I would like to think I very much understand that Star Trek like any show needs to be capable of evolving and changing with the times to ensure that it stays culturally relevant. After all I'm the first one to tell you that Star Trek has always been the "SJW" of it's era.
I could go into depth about the first interracial kiss on TV being the work of William Shatner and crew ensuring that the only take that was useable was the one in which they kissed. I could talk at length about the morality that was considered by "Measure of a Man". That Star Trek has without fail always been the first to venture into lands that some may consider controversial.
So when I hear complaints about Discovery's use of Michael Bernam so heavily my last thought is "Well it's because she's a black lady". Like no shit, Star Trek hasn't done a black woman protagonist yet, it's about time, this is kind of their shtick.  I'm quite ecstatic to see an openly gay couple being portrayed (even if we did have a bit of 'bury your gays'). This is again, the thing that Star Trek does, because it is Star Trek.
If you ever wanted the definition of literal "Luxery Space communism" look no further then Gene Roddenberry's vision of the future.
All that having been said, I still look at things like the lower decks and get a little nervous. It's not a problem with the cast, in fact the host of "Yo, Is this racist" is one of the leading characters and to me that's simply amazing, but then again I see the fellow who did TNG Season 8 on twitter and shows like Rick and Morty and South Park among the executive production crew and I have to think to ask "Is this going to be Star Trek but funny or let's laugh at Star Trek"? 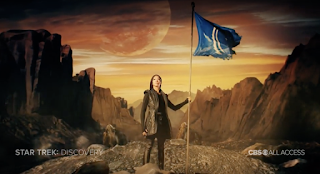 There are things that worry me about Discovery's season 3 focusing on a Federation that has fallen apart (ignoring any canon about things like the Federation having the Timeship wells only 2 centuries beforehand). While I admire the fact that someone clearly would like to do Andromeda sans Kevin Sorbo I can't help but worry that we are drifting into a Star Trek devoid of it's optimism
I fear that Kurtzman understands that the property is supposed to be a progressive statement on the potential of humanity but somehow forgets that if we show nothing but violence, gore, and darkness that somehow it's very difficult for that optimism to come across. In things like the Lower decks while Star Trek has certainly done it's fair share of comedy (Tinker, Tenor, Doctor, Spy is a fantastic example), I can't help but wonder if perhaps they looked at how fondly Star Trek fans seemed to take to shows like Orville and thought to themselves "Oh it must be the jokes".
Star Trek has always been about portraying the best of us, that there was no "Dark Underbelly" for the Federation because we had moved past that. Star Trek wasn't about how horrible humanity could be and if anything it showed that even when we are pressed against the Apocalypse (As with the dominion war) we can still strive to be better. That even if an action might be seen as inherently evil (like say perhaps assassinating a romulan senator) we can have remorse over those actions and even more only take them if we feel that the ends absolutely justify the means.
It's also why I fear things like Section 31. It seems that the more this has existed the more it has morphed from it's original ideology to simply "Generic Evil bad guys". Section 31 when it started wasn't this inherently evil organization, at the end of the day they were a twisted ideology of the Federation. The belief that the ideas and values of the Federation must be upheld at all cost and sometimes that means doing horrible things.

They seem to have devolved to "We do evil because we're bad", so much so that they would take in a woman who's plan included a genocide of the Klingon people and who's lunches included sapient beings. 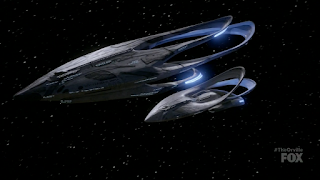 It's perhaps why I've been so drawn to the Orville. After 2 seasons, it has one purpose: To be a happy optimistic look on humanity's feature with a dash of comedy and a heavy helping of philosophizing and moral evaluation. The second season episodes like Identity really show how far Seth McFarlane's little show has come with beautiful action sequences and that spark of delightful optimism which framed TNG and other Trek era shows.
What started off more in the direction of a Galaxy quest has quickly morphed into a show all of it's own right. And while yes, there are times that Seth McFarlane's comedy shows through, I still can't help but laugh at things like Bortis and Klyden smoking 500 cigarettes and the resulting brawl when they are forced to withdraw from them.
I'll try to hold judgement from Picard, Discovery, Lower Decks, and the upcoming Section 31 spinoff, but for now all I can see is a Star Trek devoid of an optimistic future, and instead increasingly frayed and pulled away from it's original purpose. Perhaps I'm like one of the original series fans complaining about the next generation prior to them growing the beard.
I wish Star Trek was more optimistic, I wish that Picard wasn't a show about a man afraid to step onto a Borg Cube after confronting them as he did so many times before. I wish that we weren't showing androids clearly working as slaves after the measure of a man. I wish that there wasn't some kind of timey wimey wibbly wobbly red angel which seems to emit pulses of light that despite being located in sections of space like the beta quadrant are still immediately visible to a starship located near alpha centaurai (But for real Discovery writers, there are multiple times when you guys seem to think the speed of light is Warp 10+ what's the deal with that?).
Maybe things will get better, but I fear to those of us who enjoyed the "Starship Porn" and the writing style of the DS9 / TNG era, the only real escape for the moment seems to be a show without Star Trek in the name, but seemingly in it's heart (The Orville).

An Idiot’s guide to FFXIV lore