My frustration with liberal ideaologies

FIRST AND FOREMOST: In the choice between a facist and a neoliberal, I will take the neoliberal every single day of the week. As such, while I would usually say "vote 3rd party" in this case I don't because if there is even a fragment of a chance that electoralism can tide facism for four years then so be it. I will for the moment disregard the long term impacts of such a choice in the perhaps naive hope that we can at least make changes to start dragging the the general discourse back left (I know I know read theory I'm an idiot).

Anyway, so this got posted today: 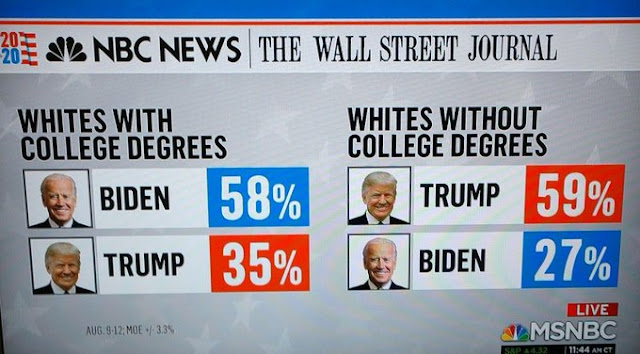 And of course the comments are filled with "Haha poor whites are dumb and vote against their interest, let us laugh at them for being dumb" as you know, we are prone to do. Queue a thousand different images of trailer parks and poorer segments of the rural sections of America with their pro trump signage.

These same people who will quite willingly admit the reasons behind the higher crime rates among people of color is because of millions of different factors (from red lining, mandatory minimums, countless local and federal policies to disenfranchise and otherwise effectively criminalize being black, brown, etc.) will then go on to laugh at poor whites for voting for Republicans consistently.

The fact is that the VERY SAME system being used to keep and disparage people of color is also working to hurt the poor whites. It's the system which does a poor job with education, water quality, and so much more in the various rural regions of the United States. It's the same policies that convince farmers that the only way they're going to be able to sell their crops next year is to invest in corn and praise at the Republican's feet because by god at least the Republicans talk to them.

One need really look no further then the treatment of folks in the coal industry. 10 ways from Sunday, the coal industry and the thousands of small towns throughout the United States which supported it are collapsing. The fact of the matter is that compared to things like natural gas it just isn't economically efficient to mine coal. And so you have on one side the Republicans selling snake oil and on the other side the Liberal party going "Oh well we'll get you new jobs :D". Of the two solutions presented only one actually has any hope of working (hint it's not the new jobs).

Say what you will, the republican corruption can at the very least for these people delay the inevitable. You aren't going to be turning Whitwell, TN into the next silicon valley. No amount of job retraining efforts are going to work to keep a coal mining town together. And so you have these segments of the US populace who do nothing but denigrate and degrade poor, uneducated white folks and then are utterly confused when they grow more bigoted and defensive.

Are they racist? By our standards, absolutely, but you know what they also never took lessons in? The hours upon hours of lectures on issues like privilege, race, sex, religion and more. They haven't seen other people that fall outside of their world view. The system which is busy keeping down people of color is isolating poor whites, and feeding them a constant supply of drivel and propaganda.

Want a story from the New York Times? How about the Washington Post? Well you have to pay for those and while YES there are addons that are used to get around those, the general public doesn't go looking for addons, instead you know where  they go? Fox News, because Fox News won't put a paywall up on an article because they care more about readership then advertising dollars.

We are losing the information war on so many fronts and then we turn and belittle the people that are being beaten up just as much. We have successfully convinced the PMC (professional management class) that if they just yell and denigrate poor whites enough they will "educate themselves". The fact is they won't, not until you get into these small towns and try to introduce improved education, better and more accessible college, better roads.

As they say, all politics is local, and rather then trying to diversify progressive opinions, we have instead bottled them up in large cities. You don't win people over that way, and you even more so put yourself in greater danger of being routed.

It is frustrating, stop yelling at poor whites for being racist and start realizing these people are being held in their belief system by a systematic method of keeping them in place.