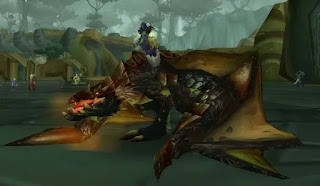 As I'm sure you all know, I've long mused on what exactly put us on a path towards the current state of World of Warcraft. I've made no secret about the fact that I am not satisfied in the current state of the game along with countless others. And so I like many others went to play other games and enjoy other MMO's. It's proven nice to get a chance to really explore how the rest of the industry handles itself.

I could expound upon the different systems each uses, the stories that they weave the character into the plot or the use of systems like housing and the like to allow the players to really explore and define their own little segment of the world. I think though, that these aren't the real problem I have with WoW, at least not in it's current state.

Let me tell you a little story, about getting into Wrath of the Lich King. I was in college, getting ready to spend 3 years huffing it through Indiana Winters which for a southern boy like me might as well have been the same as going into Northrend. Weather aside, I remember being so excited because this was the first expansion that I had a character at level and ready to go. I had never done an expansion at launch so this was a whole new experience for me.

WoTLK introduced this awesome new system, Achievements. It let you know just how much of the game you had actually gotten done. It was a set of goals / quest to pick up on and even let you look at others to see what they had done. But there it was, the first in what I posit in my little TED talk of a blog post was the unraveling of an RPG.

"Realm First: Level 80 Druid" - This little message popped up quickly and soon all of Gilneas (the server I was on) knew not only that someone had gotten to level 80, but also their name. So they would get a wave of congratulations and praise. Honestly I think all of us thought it was cool, a little tip of the hat to those folks who had gone above and beyond.

In the coming weeks while folks were doing the Nexus for the first time or traveling through Sholazar basin they might see a flood of 25 or so "Realm First: Conquer of Naxxramas". Oh man, the first guild to get down Naxxramas (technically Sartharion went first for most, but that's not important). And even more importantly then that, they got to run around with a little title. Again, this was cool, everyone handed their congratulations out, we went about our day and did our thing.

Then, there was the Black Proto Drake. Originally tied to the achievements for Naxxramas, it was a sign that if someone was on that mount during Tier 7, that at the very least they were somewhat competent as Undying was a required part of the meta achievement.  It was a cool mount, like the Gladiator mounts of BC, an achievement for getting the content done.

Then blizzard did something, they removed it. With path 3.1 and Ulduar Blizzard figured that people who would get 226 ilvl gear would be able to roflstomp Naxxramas, thus cheapening the mount and the related achievement. As such there didn't seem to be any real opposition to removing the mount and achievement. I mean, Blizzard had already done similar in the past with the Gladiator mounts, giving them out only to those who had been gladiators that season.

I argue, dear reader, that it was this set of steps, this sense of FOMO (Fear of missing out) started in 3.1 that would lead us down the path to where we are today. Suddenly there was this push to make sure the Ulduar achievements got done, a fear that if you didn't get them by the time 3.2 dropped, you might miss out on your chance for an Ironbound Protodrake.

More then that, now everyone knew that there were titles tied to defeating the end boss of a given raid. There would be that little rush of dopamine if your guild was the first to get there and knock out a piece of content. Ulduar was the first time I distinctly remember attention being drawn to the "World first race". You see prior to WoTLK Nihilum (or Ensidia as they became known) had basically done nearly every world first (or claimed to at least).

But with Ulduar, I remember things changing, the first time these world first races were recorded on video. I remember the hustle and bustle when someone used a buff spell stolen off Freya's ads to take out Hodir hard mode (and how quickly that one was hotfixed). Ulduar was different. It wasn't like any raid prior. Instead of just a 25 man or 10 man, there was also an added metric, the hard modes. Every fight had it's "hard mode", which could be triggered through various things throughout the fight.

It was a way for the top of the top to truly prove why they were there. The best part? If you defeated every boss on it's hard mode you could unlock a CHANCE to fight Algalon the Observer. He only stuck around for a few hours so if you didn't manage to beat him in that time you'd have to wait until the next lockout.

Following the success of Algalon and Hard Modes, Blizzard then moved to introduce Heroic Raids and the Trial of the Crusader. The trial of the grand crusder had a unique chest chock full of goodies if you could beat it. The trick this time though was that we all knew it was going away. Unlike the black proto drake we were all keenly aware that the Trial of the Grand Crusader would be vanishing in the upcoming patches.

And so it continued on and on, with the Lich King there was the guaranteed  drop of Invincible if you could kill him while the patch was still current (the foundation for the later AoTC model). In cataclysm I remember the live wipe counters being kept for Heroic Ragnaros. This combination of feeding these top guilds more and more difficult challenges along with the media that surrounded them only grew.

Now in 2022, the World First Race is part of the culture, it is a big streamed event with it's own little spot in Hamburg, Germany. World first guilds gather, compete, and show off their stuff in a competition to show just how good they are.

But I think, that that little black Proto drake, and the design decisions that followed it showed players who weren't chasing world first, who hadn't cared if Ensidia or Curse was going to be the one to finally find a magical way to beat M'uru, that perhaps they didn't have all the time in the world to complete the content.

It told players that Blizzard was going to remove quest chains (IE Atiesh) from the game, make things impossible to get once they were done. It told them that if they didn't get this done now, they may never get a chance to. By Myst of Pandaria this had been dialed all the way up to 11 with Challenge Modes. A guarantee that if you didn't get them done before the end of Myst of Pandaria, you were never going to see those armor sets.

By Legion virtually every piece of content had a planned obsolescence, a drop dead date when content would simply no longer be available. The Mage Tower, The Brawlers Guild Mount, the AoTC Mounts at the end of each piece of content, hell even the AoTC achievement. The entire game thrived off of basically telling players that if they didn't play this now, they weren't ever going to get to.

I posit that it was this decision making process that has lead us to the meta hell we are in today. This notion that content can't be done at your own pace. That if you don't get the content done here and now there is a chance that Blizzard might roll the next patch out and you'd loose access to it forever. I remember being struck by a list Hazel (From HazelnuttyGames) had of things that were just going away after each patch.

To then compare and look at something like FFXIV or other MMO's and realize that one of the nice things there was that there was no need to rush. Eventually with enough time, patience, and effort, so long as the company was still going, you could still reasonably see every piece of content. And, if a piece of content is removed in some way, they slap it up on the mogstation afterwards (at admittedly a real world price).

It's no wonder that lives became dominated with DPS Meters, skips, and a need for only meta groups, there was a penalty for not doing something now. If you failed to do something enough, you may very well miss out on it. So players naturally get more picky about how they spend their time. Instead of just giving a few shots at Sethek Halls, now if you don't have Sethek Halls beat by May, then you'll never get to see Anzu.

Whole quest chains uprooted (Virtually all the druid class quest), and an entire world reshaped in 4.0 with no way back (Cataclysm). WoW established early on in it's career that there was a timer. It wasn't just for Mythic+ or Challenge modes, even if that was what was visible on your screen, but a bigger clock. Every failed attempt at a piece of content meant the time on that clock got shorter.

Now, you don't want to risk what time you have chancing it with a spec that according to everyone else performs a little worse. To make sure you get the content done, you are going to ensure that you make your chances as high as possible. Why go with a 78% chance when you could go with 79%? Now in Shadowlands with Seasons for Mythic+ where affixes are removed each season this incentive is made all the more imperative.

It becomes this self feeding cycle and at some point I think unbeknownst to the player base this "Meta is king" started to really become this almost Magic the Gathering like second nature for the game. The "E-Sports" nature of world first, Mythic+, or whatever else dominates every aspect not just of the player but of the development cycle. The content of importance becomes the raids (compare for example development time on Molten core, which was apparently scrapped together only figurative moments before launch versus something like Seplecur which is the key piece of content for a patch).

I don't pretend to know Blizzard's internal workload or where priorities are. I have no clue what art teams, music teams, and more spend the majority of their time doing. I only know that the end product I see turned every aspect of the game into this race. FOMO is the dominating factor in almost every patch, and the motivation to play is less to see the new content and more to make sure you get AOTC or for you really brave gremlins doing Cutting Edge, well all the more power to you I suppose.

I just have to wonder if the various services (Boosting / etc) aren't also born out of this same race mentality, and more then that, what kind of harm it does to the game overall. Who knows, maybe there is an Ultimate boosting community in FFXIV that I've just never heard of.